After a long time of evaluation of different antenna systems I had a look on some professional multiband dipoles during the ham-radio 2008 exhibition. What I have seen did not convince me in any way. These antennas are extremely expensive (more than 100 € for a few meters of wire) and the bandwidth is narrow.

I used an FD4 for a few month and had lots of problems with TVI/BCI due to the unsymmetrical concept of these windoms. Therefore I decided to use monoband dipoles for 40m and 80m.

Using a FA-NWT network analyser I tuned the wires perfectly in the middle of the bands. So I don't need any tuner to work on 80 and 40m. 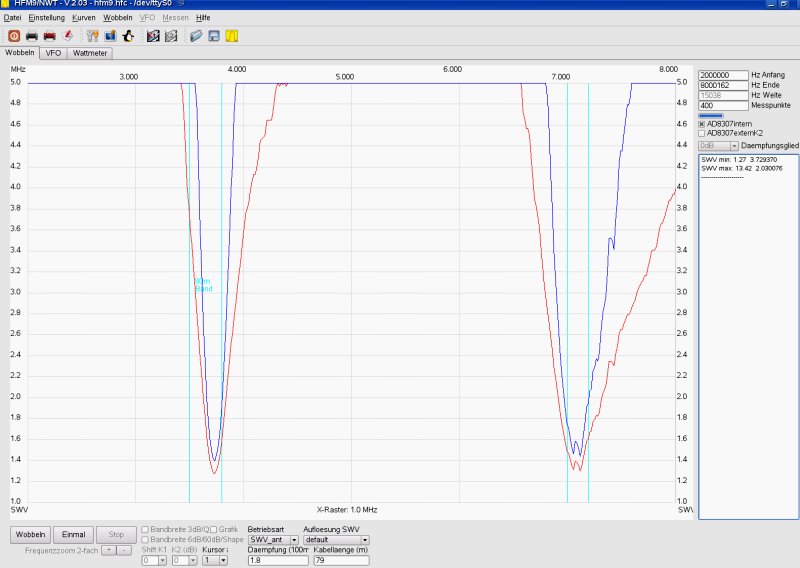 Since this antenna was working fine I planned to extend it for the 160m top-band.

The best configuration for the space in my yard was to use traps to extend the 80m dipole for the 160m band.

I am using a 100mm drainpipe with 8 turns of Aircell-7 coaxial cable. This trap is resonant on 3.8 MHz.

The traps are now mounted at the end of the 80m dipole and extended with 13m wire. Now this trap dipole is resonant in the middle of the 160m and 80m band. The bandwidth on 160m is a bit narrow due to the inductance of the trap, but with the transceivers's tuner I can use it on the full 160m band.